END_OF_DOCUMENT_TOKEN_TO_BE_REPLACED

Wizkids will be adding a new line based on the upcoming film Pacific Rim, to its flagship collectible miniature game HeroClix. 10 different figures based upon characters from Guillermo del Toro will be part of the line, with each individual miniature being blind boxed. More information on the Pacific Rim line is expected from Wizkids soon while the movie itself will be released on July 12th, 2013.

The first mobile game based on the Warhammer franchise has been released on iOS devices by British game developer Rodeo Games. Entitled Warhammer Quest, the game offers elements of both role-playing and strategy and features 25 hours of game play. Set within the world of Warhammer, the game also includes dungeon battles with the likes of orcs and goblins, the ability to loot a wide variety of items and of course, plenty of opportunities to help level up your character. The game is now available on the Apple App store for $5.

Dungeons & Dragons will soon be getting its very  first mobile game thanks to a  partnership between the game’s publisher, Wizards of the Coast, and Japanese game developer DeNA. Entitled Dungeons & Dragons: Arena of War, the game is set in the Forgotten Realms and provides a traditional role-playing game experience with quests, working with a group and of course, character leveling. The free to play title is set to be available for iPad, Phone and Android devices once it is released. To pre-register for the game, visit Arena of War’s official website.

Yu-Gi-Oh! will soon be getting its own line of HeroClix thanks to a new partnership between NECA and Konami. NECA, which owns the HeroClix brand has acquired the license for Yu-Gi-Oh! through Konami’s subsidiary, 4K Media. 50 HeroClix figures are planned for release later this year with new releases expected in 2014 as well. Yu-Gi-Oh! is best known for its anime and trading card game which came out in 2001. HeroClix was first released in 2002 and is one of the most popular collectible miniature games on the market and currently produces lines based characters from the DC and Marvel universes. 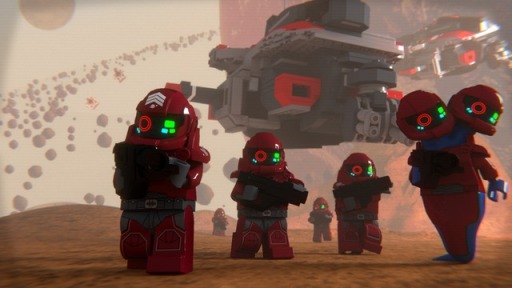 The Space Marines project on LEGO CUUSOO has garnered more than 10,000 supporters and will soon be reviewed by LEGO to see if the concept will be turned into a new set or a theme. The creators of the project have made numerous concept images and a promotional video as well, showcasing what a potential Space Marines theme or set might look like.

LEGO has previously tested the waters with a Space Marines style concept with its Collectible Minifigures Series 7 , the Galaxy Patrol figure (pictured above), which, in fact, the LEGO CUUSOO Space Marine armor are based upon. Currently, LEGO has two Science-Fiction inspired themes, Star Wars and the newly released Galaxy Squad. LEGO Space Marines has the possibility to carve out another niche in the LEGO lineup, which has grown increasingly diverse over the years, with themes such as Ninjago and the upcoming Legends of Chima, to licensed themes such as The Lord Of The Rings and Teenage Mutant Ninja Turtles.

Space Marines, in recent years, have perhaps most been popularized by the popular video game franchise Halo and to a lesser extent the wargame, Warhammer 40,000. Halo has a  line of construction sets produced by Mega Bloks while Games Workshop has been producing Warhammer 40K Space Marine miniatures (pictured above) for years. Since the Space Marines project is part of the review that began on December 3rd, it may be a few more months before the results are announced by LEGO.