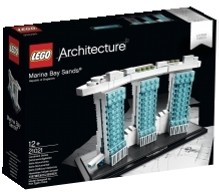 The iconic Singaporean Marina Bay Sands resort and casino will soon be getting its own LEGO Architecture set. Opened in 2011, the resort and casino was developed by Las Vegas Sands and features more than 2500 guest rooms and high-end restaurants owned by the likes of Wolfgang Puck and Guy Savoy. The Marina Bay Sands was built at a cost of nearly $6.5 billion and attracts nearly 25,000 gamblers a day who have the opportunity to play on 2,500 slot machines and 500 gaming tables.  The 21021 LEGO Architecture Marina Bay Sands is set to be released sometime in 2014.