Kyurem is quite a legend in the world of Pokemon, quite literally so, considering that Kyurem is in fact a legendary Pokemon. The new Pokemon White Kyurem Articulated Vinyl Figure from Tomy depicts the “white” version of the dragon and ice type Pokemon, who is formed when a DNA splicer is used with fellow Tao trio Pokemon Reshiram. The White Kyurem is best known for gracing the cover of Pokemon White Version 2.

The White Kyurem figure is about 6 inches tall and nearly 7 inches long. The figures packaging does not enclose the figure, rather, it is tied down to a cardboard base and the rest of the figure is “open”. The figure features a upper body made of solid plastic while the lower body and the tail is more or less hollow. 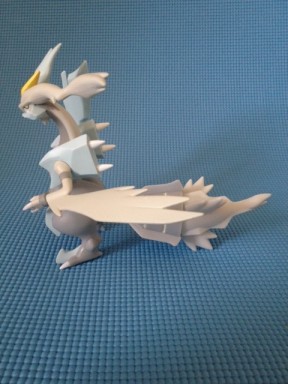 The figure features some articulation but mainly on the lower body but the White Kyurem’s head and hands do not move. But, its legs do feature articulation and its tail has the ability to rotate. Although, sometimes, the legs on the figure can move a little too freely. Additionally, the figure can also stand up well on most surfaces as it uses its legs and tail for support. The figure also features a decent paint job, with particular attention having been paid to the eyes.

Overall, the White Kyurem vinyl figure is a large figure that recreates a very interesting character from the Pokemon universe quite successfully. While it does lack some articulation, its large size makes it eye catching and unique figure to have on display. The Pokemon White Kyurem Articulated Vinyl Figure from Tomy is priced at $15.99.

For more information on the White Kyurem or other Pokemon figures, check out Tomy’s official website.