The prefix penta, from ancient greek, means five, and that is all you need in a row to win a game of Pentago. Seconds to learn, years to master is the motto of Pentago and it certainly holds true for the game. Haling from Sweden, the Scandinavian sensibilities of simplicity and minimalism shine through while a considerable strategic element is maintained, giving the game a wide ranging appeal.

This two player game is very simple. Pick the blue or red side of a game marble and place it on the game board in one of the four blocks. Then, twist a block on the board every turn until one player gets five in a row. That’s all there is to it! But don’t let the simplicity fool you!

The game still poses a mental challenge with both players devising tactics to outwit the other. Straightforward play may only last a few minutes while making calculated moves may cause the game to go on for much longer! According to the box, playtime can vary from 3 minutes to 30.

Made for ages 6 or older, the game shows its strength in that it can be played enjoyably with a young relative or a member of Mensa, an organization from which  Pentago garnered an award. 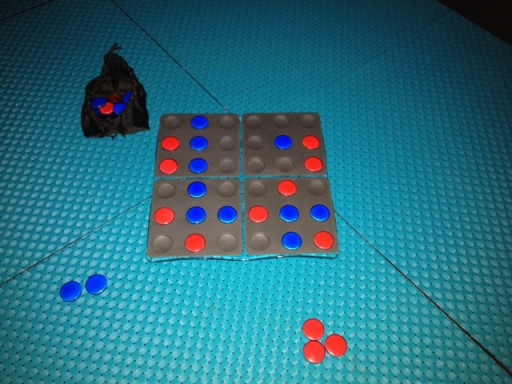 Overall, Pentago is great fun and provides for an enjoyable play experience that is suitable for a wide audience. With the plastic version of the game having a price point under $20, it is also a great value for a game that is fun over and over again.To check out different versions of the game, head on over to Mindtwister’s official website.

One thought on “A 90 Degree Turn Away From Victory: A Review of Pentago”